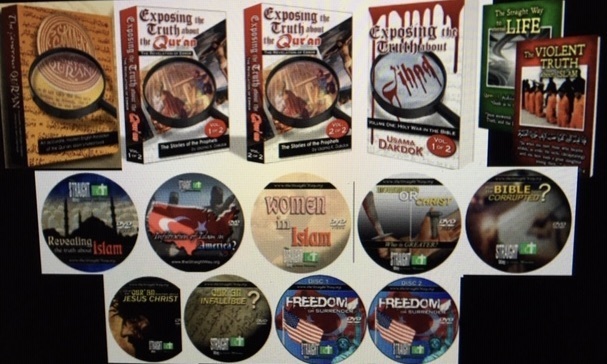 If you know what you want you can go directly to SHOP BOOKS/DVDS.

Descriptions of our available books and DVDs for you to order.
Hope this helps you decide what to order on the form below. If you already know what you want, scroll down to the Order Here button.

Translated by Usama Dakdok and an international team of scholars, this is THE ONLY ACCURATE English translation of the Qur’an available anywhere!

Highlights Non-Arabic Words and Idioms in the Qur’an

Study Notes for the Reader

Exposing the Truth about the Qur'an, The Revelation of Error, The Stories of the Prophets

Muslims claim that the Qur'an is the final revelation of Allah to humankind   as he revealed it to Mohammed by his angel Gabreel. Islam contends that,   upon reading the Qur'an, the seeker is at once convinced that it is the very   word of Allah. Muslims declare that no mere man could have written such a   perfect collection of verses covering a wide variety of topics and doctrines.   Within the pages of the Qur'an, one will find familiar events and people,   such as the Creation, the Flood, Adam and Eve, Noah, Abraham, Moses, and Jesus. But even the casual reader will notice distinct and striking differences between the qur’anic and the much older biblical accounts of the same topics. When confronted with these discrepancies, Muslim apologists will counter that it is the Bible itself which has been corrupted. In this thought-provoking two volume book, the author will examine and refute these claims through careful comparisons of qur’anic, biblical, historical, and archaeological records. The reader will discover that the Qur'an does not even agree with itself concerning the lives and actions of the prophets and is completely at odds with the much older biblical accounts. Finally, the writer will highlight another key area which refutes a divine origin for all of Mohammed's so-called revelations, mistakes, and contradictions. Exposing the Truth about the Qur’an, The Revelation of Error will discuss the many hundreds of geographical, historical, moral, theological, legal, scientific, and linguistic errors contained in Islam's holiest book. After fourteen centuries of blind adherence, now is the time for critical and thoughtful examination.

Exposing the Truth about the Qur’an (Vol. 2) discusses a wide range of topics and people such as: King David, King Solomon, Daniel, the Rebuilding of Jerusalem, Alexander the Great, Jesus, and even Mohammed.

In the video below Usama will explain his compulsion for writing this two volume book.

Exposing the Truth about Jihad

Death. Violence. Bloodshed. Humanity’s history is a long and winding trail, often marred with fighting and tainted with blood. This dark trail began with rebellion and murder in our first family and has continued, unbroken and unrepentant, until our modern world. From the time that Cain lifted up his hand and slaughtered his own brother, mankind has never departed from hatred, greed, and war. There have been battles for lust, for land, for money, for power, and for revenge. But what about religious wars? What about killing in the (supposed) name of God or a particular religious persuasion? It is perhaps quite telling that the first murder in history was related to religion. This ruthless attack was carried out due to the intolerance of a religious view that sought to justify itself instead of simply trusting in the provision of the Lord. It was the first of many unholy wars that would be fought to wipe out those who worshiped the Creator according to His mercy and grace. Cain killed his “infidel” brother to seek to establish his own religion of power. It was the beginning of countless unholy “jihads.”

However, let me ask an important question: is war ever “holy”? Is it possible for there to be justified bloodshed according to God’s judgment? It is undeniable that the Bible records many instances of the Lord bringing death and judgment through various “holy” wars. What is the difference (if any) between these battles and the violent history of Islam over the past fourteen centuries?

Since the September 11th attacks, the West has become aware of the Arabic word "jihad." In the Qur'an, Jihad means "war to establish the religion of Islam." This is how Islam has typically spread, not by evidence, but by the threat of the sword.

Now, skeptics will point out that there is also war and death mentioned in the Bible. From the purge of the Canaanites, to the various wars of the nation of Israel, the scripture does record bloodshed. But, is the Jihad in the Qur'an the same as the killing in the Bible? Absolutely not.

In this two-volume series, Usama Dakdok provides both an important overview and an insightful examination of the details surrounding death and killing in both the Bible (Vol. 1) and the Qur’an (Vol. 2). The reader will see the pattern of justified killing in the Bible (judgment due to sin) versus the arbitrary and unjustified murders carried out in Islam as commanded by Allah.

Volume I: Holy War in the Bible

Volume 2: Unholy War in the Qur'an

In this second book of a two-volume series, we will investigate the unjustified murders as recorded in the Qur'an. We will examine the verses regarding jihad and war, along with their interpretation by Muslims scholars. In addition, we will study how Mohammed and his early Muslim companions practiced them, as well as how Muslims have continued to do so for the last 1,400 years.

Why you need this booklet!

How many times have you met a Muslim man or woman, maybe in the airport, on a bus, or in your neighborhood store, and you felt burdened to share the good news of Jesus Christ. However, you didn't know what to say or even where to begin. The Straight Way of Grace Ministry has now produced a small, convenient tract that will empower you to reach those lost in the deception of Islam. This 24-page booklet will share three facts. First, it seeks to convince Muslims that the Bible has NOT been corrupted, using just the verses from their own Qur'an. Secondly, it reveals convincing proof that the Qur'an cannot be the Word of God due to an overwhelming number of errors and contradictions. Finally, it clearly presents the loving truth of the soul-saving gospel of Jesus Christ and how we can have free, eternal life through Christ alone.

What everyone needs to know! Why? It is because Muslims believe in the teachings of the Qur'an.

Muslims continually claim that Islam is a “loving and peaceful religion.” They also insist that violence is committed by only a few radicals who misunderstand the teachings of Mohammed which are found in the Qur’an and in the Hadith. But, is this actually true? This new 24-page booklet examines such claims along with dozens of passages from the Qur'an and statements from the Hadith and Muslim scholars. What is the cause of violence and terror in Islam? This booklet will leave no doubt that Islam's long history of intolerance and bloodshed arise from the very words of Allah in the Qur'an and from the example of Mohammed's life and teachings.

These are just a few of the presentation topics that Usama does when he is invited to an event.

REVEALING THE TRUTH ABOUT ISLAM

This seminar is our foundational presentation which provides a broad overview of the history, the teachings, and the current conditions/goals of  Islam in the world.

HAS THE BIBLE BEEN CORRUPTED?

Muslims are taught that the Bible has been changed over the years and is not reliable. This presentation refutes this false teaching head-on, point-by-point.

IS THE QUR'AN INFALLIBLE?

WHAT THE QUR'AN TEACHES ABOUT JESUS CHRIST

MOHAMMED OR CHRIST, WHO IS GREATER?

INFILTRATION OF ISLAM IN AMERICA

In this chilling and challenging investigation into the continuing plan of Muslims to take over the West (and eventually the world), you will be shocked by the agencies and groups already in place within the United States that are dedicated to this   cause. Featuring on-camera testimony from an FBI agent tasked with studying the activities of dangerous groups in the USA, you will be alarmed to discover that Muslim extremists have gained prominent positions within the federal government and have even trained our law enforcement personnel on methods of dealing with Muslims.
********************************

The world is reaching a cross-roads, a dangerous turning point regarding the  threat of Islamofascism. According to the Qur'an, Islam has always had  world domination as its ultimate goal, but now its sights are firmly fixed on America. Muslim   groups and organizations have infiltrated our culture, seeking to establish Sharia (Islamic law) across our great nation. With the election of Barack Hussein Obama as President, our political leadership has installed Muslims in powerful and key   positions across the federal government. In this thought-provoking seminar, Usama draws upon current events in the news to demonstrate how quickly we are moving towards "one nation under Islam." His message is clear: America, now is the time to choose, to choose Freedom, or to unknowingly choose to Surrender to Islam. You will want to share this powerful call to action with family and friends. Freedom or Surrender--it's time to choose.
*************************

(SPECIAL DVD SET) This set includes all the DVDs listed above.

Subscribe to receive email updates with the latest news.